6 of 8 things you don't know about me 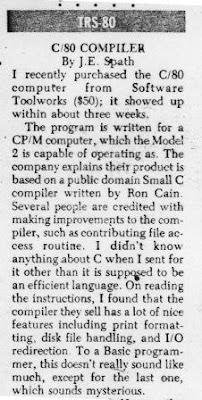 I have owned way too many computers over time, and while it took me a few years to get a job where I could work with technology, I spent my spare time as a computer hobbyist. The attached clippings are the beginning and ending of an article I wrote as editor of the TBUG newsletter, the "TRS-80 Baltimore Users Group". I didn't make up the club name, but probably would have created something just as lame.

The group had existed for a couple years before I joined, back before every store in the country stocked software, so young guys got together to trade stories, and perhaps to share software. That is, until the owners of The Program Store (I did not make that up) showed up at a meeting and put the fear of the law into the group, for making illegal copies of software.

This meant that, for many, the reason for going to the meetings was not there any more. I wasn't that interested in commercial software - I was interested in software and hardware hacks. Thus, I ended up as the mailing list owner, the newsletter editor and keeper of many records. I did a monthly edition, and would send copies to other clubs around the country, who would in turn, share their stories. It was a scratch my back, scratch your back time. The standard blurb said that our content could be reproduced as long as proper attribution was given. As a result, my review of an early commercial C compiler was reprinted 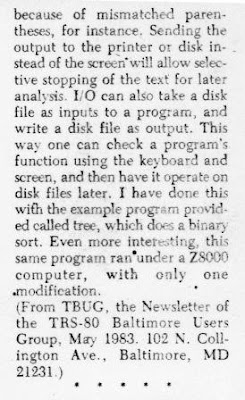 not only in the Kansas City TRS80 club newsletter, or wherever, it was printed in the Computer Shopper. I had tried unsuccessfully to get published in Byte, but here was my name and words being sent around the country. Cool!

So there you go, my first published words, not counting self-publication like the TBUG newsletter or the high school literature magazine Paul Hartman put out (Renaissance!). And a close friend at the time was torqued, because I was published before she was.

The TBUG club slowly dwindled in the face of that upstart, the IBM "Personal Computer" (boy did we think that name was lame). I can't remember the last meeting, but I recalled we got kicked out of one school because children of a member trashed the cafeteria when we weren't watching them. One club president (Jack) went on to open a store, selling Apples and PC clones, before the big chains came in to put him out of business.

I still write C programs on occasion, over 20 years later. I think some others are still using that language too, but I think the CP/M Operating System has gone the way of the dinosaur. And what's a Z8000 anyway?