I had a basic 6 volt lantern that used standard dry volt batteries, but decided to try to update it to use rechargeable lead acid power supply after disassembling a lantern I bought a few years ago. The fancy one came with a solar panel, a 12 volt car adapter and a 120 volt wall transformer, and included an LED lamp as well as a fluorescent bulb, with a switch for either or both light sources.

The friendly folk at Baynesville Electronics set me up with a "super bright" LED bulb ($2.79) and a pack of 68 Ohm resistors (4 for $1.39). The LED part number is NTE30045 (NTE Inc. link). Oh, yeah, and a couple spade connectors for 35 cents each. Both were red, so I marked one with black magic marker. I also used red and black wire, so that should keep the polarities straight. 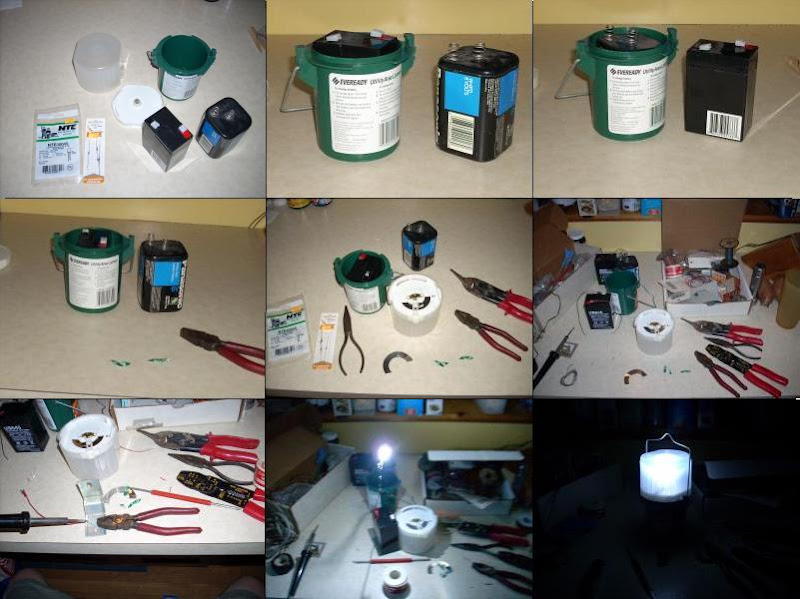 First problem was unexpected - while the old and new batteries were about the same size, the wet cell was a bit taller, so the lid didn't fit back on. I chipped off 2 of 4 fins that were in the bottom to keep the square dry cell from spinning.

Then it was time to dip into the parts box for soldering iron, wire, and, eventually, a switch. I was unable to reuse the existing switch as I had to break off part of the metal ring to keep the new battery from shorting, and could not get a wire to stick to the remaining section. It might be aluminum; I'm not sure.

The next to last shot shows the LED bulb lighting up the scene; the last shot was after all the switch rewiring. I believe it should be pretty easy to pull this battery out and swap it into the larger lantern with the solar panel feed.

The battery itself came from an Amazon reseller. SKU was UVUB645F1. Two of them showed up within a couple business days. My only complaint was the weak packaging - both batteries were in thin cardboard boxes, stuck in a padded mailing envelope. At least one of the terminal protection plastic terminals had slipped loose, and the cardboard boxes were torn a little from the mail handling.