Inside Track India Back Story

When Abesh asked me to present something at the SAP Inside Track event in India in December, I checked the calendar and realized not only was it during a camping weekend, the time zone difference meant it was starting around midnight for me, lasting until around 9AM the next morning. I said I would record a video for the "keynote" time period, and try to be online then so I could chat if possible.

After a bit of thought, I decided to make a video with a number of segments, each around 30 seconds, and do "costume changes" between scenes. My original plan was 20 scenes, for a running time of 10 minutes; the final cut was perhaps 15 shots and about 8 minutes, 90 seconds of which was not actually me.

I decided to set up a tripod, point the FlipCam (cheap high definition video camera, now obsolete due to the new owner cutting the product line) at a chair, so I'd be able to fade between takes. The part about pointing the camera at a fixed spot worked very well, only if I had to do it over I'd have come in for more of a close up. The resolution was fine, on the original shots, but the microphone didn't pick me up very well on some takes. I wanted to show different SAP related shirts (or kurtas) so I could not come in too tight, but getting more audio would have meant hooking up another microphone, adding production time to something I wanted to do quickly.

I wrote up notes on the scenes and stories I wanted to tell, laid out a dozen outfits, and started shooting one right after the other. The first take was uploaded to YouTube, even though after watching it I realized the audio was too quiet.

The bigger problem with the rendering of this clip was my choice of "WMV" format. While it looks and sounds okay, the video editor took a widescreen image and bent it to a smaller window. When uploaded to YouTube, there are black bars on the side, which should not be there, and I look thinner than I really am (like a fun house mirror). The other output formats did not have this issue, and I have not found a fix for the WMV format. When I play the file locally with VLC, there is a switch to widen the picture, which works fine. YouTube does not have this, as far as I can tell.

Once I edited together the clips, taking out the time where I sat down or stood up, I wanted to have transitions between them. Again, the video program either did not behave, or I was unable to find the controls I had used in prior work to do fade in or fade out effects. With a short time window, I gave up on the video effects and stuck with sound bites only.

To back up a minute, one thought I had was a sound track with music from India, whether tabla drum, sitar or something like that. But I definitely did not want to include any commercial or copyright sounds. Unfortunately, in brief (or not so brief) searches for drum clips, I found almost nothing free and unencumbered by copyright. I finally came across a site with sound samples that have been placed in the public domain. The coolest part of that was the site was "One Laptop Per Child" - a project I had read about, and contributed to in the past.

There I found information about tabla drum samples from Mihir Sarkar. The actual files are on archive.org, another place I have used, to get Grateful Dead public recordings, and view some old movie clips. Nice site!

The page said "Sound samples by Mihir Sarkar recorded for Richard Boulanger for use in the One Laptop per Child music library. See http://wiki.laptop.org/go/Sound_samples for details."

Each of the files within the archive are one type of drum "hit". Not being a true music student, and again, in a hurry, I took a few samples, pushed them together using Audacity, and exported as an MP3 file, hopefully with proper tagging to show the required attribution. Check the MP3 ID tags for the track:


While on a Thanksgiving weekend visit to the home of Marilyn Pratt, I brought along the FlipCam, intending to get Marilyn on camera for a dialogue about the community network and India. There wasn't much time to focus on this (pun intended) and I ended up leaving the camera for her to create a clip late in the evening. I took off early the next day, and while she left a note saying she recorded something, I didn't get a chance to see it until I got home (when it was impossible for any retakes!). Again, one take.

Once spliced and mixed, I needed to render the file, which is always a challenge for me. So may options, some of which work well with YouTube, some of which don't work so well, and some of which don't work at all. And apparently, this spectrum changes more frequently than expected (another story). I decided to have Plan A be upload the entire high definition file with Dropbox, and Plan B be to use YouTube. The reason a file was Plan A was the possibility of internet failure at the event site. Assuming the on-location hosts were able to download the file, bad internet would not prevent the un-keynote from playing.

Two problems cropped up right away. The first was download speed; Abesh was able to download the movie quickly, but he isn't in Bangalore or Kolkata. And as soon as one of the actual hosts began to get the file (which, unfortunately due to the render format I picked was over 1GB), my shiny new Dropbox account was suspended, initially for 3 days. I griped online via Twitter, and was given a reprieve very, very quickly, but even with that, only one of the two site hosts was able to get the file.

With the video uploaded to YouTube as a private link, I thought I was off the hook. For some reason (more than one really), the Plan B did not happen, and much later than I was expecting, I needed to talk on camera to the attendees in Bangalore. I was in Scout Camp, at 11:30 on a Friday evening, trying not to disturb my friends who were administering camp reservations that weekend, and was asked to do the un-keynote on the spot. Eventually, we got the audio and video hooked up, 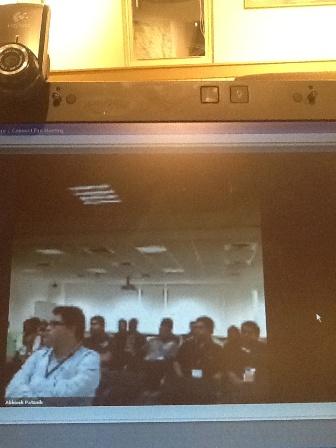 Thank you Jim for sharing the insider edition of the Video. Felt bad for the technical snafu at SIT India morning but we saw your video before closing the day (:()
Amazing how you managed to stay up and share your keynote live address in the morning.
Cheers,
Somnath

Somnath - it wasn't extremely late, and I had a couple veteran Scout friends to chat with before my scheduled time. Fortunately the camp office wireless let me address the audience iafere a fashion. Next time I will work harder on my compression algorithms!
Jim