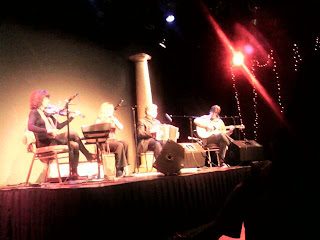 Billy McComiskey and The Hedge Band played at the Creative Alliance tonight.

The crowd was a little slow getting into it, but by the second set there were plenty of tapping feet. It was also a slightly older crowd than the ones I've seen at J. Patrick's in Locust Point.

The possible highlight of the evening was Irish step dancing, starting with a precocious girl who later stated her age as "Six. And A Half." The two teens were just tremendous, and danced several times, including stepping through the aisles of the Creative Alliance performance room.

Billy's stories were as expected, wandering the ages and people of Irish music. The crowd pleaser was his announcement of how well the Old Bay Ceili Band did in the all-Irish contests earlier this year. You might need to be from Baltimore to see the humor.

The band consists of Donna Long on piano and fiddle, Laura Byrne Egan on wooden flute and whistle, Pat Egan on guitar, and Billy McComiskey on button accordion. Everyone sang, though Pat was under the weather, and declared he was doing a Barry White set.

CDs were available, but I think I have all of them already. Here are links if you want to find them on Amazon or elsewhere:

Not the most high definition or fidelity, but here are a few seconds of the event from my camera phone.

Sent from my Windows SmartAleck® phone. And then fixed later on the web.