I was hoping to be able to post updates from SummitCorps on a daily basis, expecting that even if I could not get connectivity on the trail, I'd have it at the base camp. I was hoping Glen Jean, West Virginia was going to have a cell tower nearby. There may be, but my phone, when it show service, is on extended or roaming staus, and I have yet to get a data packet up or down from here. So I'm writing this as if it will be posted soon, and hope that somehow I can. If you read this before Saturday, then I get through the matrix. My car is parked several miles away, where there is coverage, but getting there before the end of the week is problematic.

The drive to West Virginia was only a bit longer than my estimates, and there was only a short period near the end that I grew weary of driving. To alleviate the fatigue, we pulled into a State information center. After chatting with the two people on duty, we found out on is an Eagle Scout and Cub Scout leader. He knew about "The Summit" and expressed his appreciation that we were working on the project.

I was prepared for conversations with the Lodge Chief on the drive, knowing that I needed to chat so my mind didn't wander. We covered many topics, from the past and future OA Conclaves, to the picnic last Saturday, to the City Scouting initiatives, as well as my career and visions of his future.

Checkin was fairly smooth, though something went wrong with our deposits. We found out the Summit is not far away, but as it is under construction, we were not going to get any tours of the site. We drove the wrong way trying to find the National Guard armory, and saw the gate and guardhouse entrance. You can see a mound of dirt at the top of the hill from the armory.

The route that we came into the area by the SummitCorps base camp, we did not see the New River Gorge bridge, but it's not far and people told us to check it out Saturday. It's closed one day per year for BASE jumping. Most of the project attendees will be doing whitewater rafting on the river Friday, though I an scheduled for mountain biking. 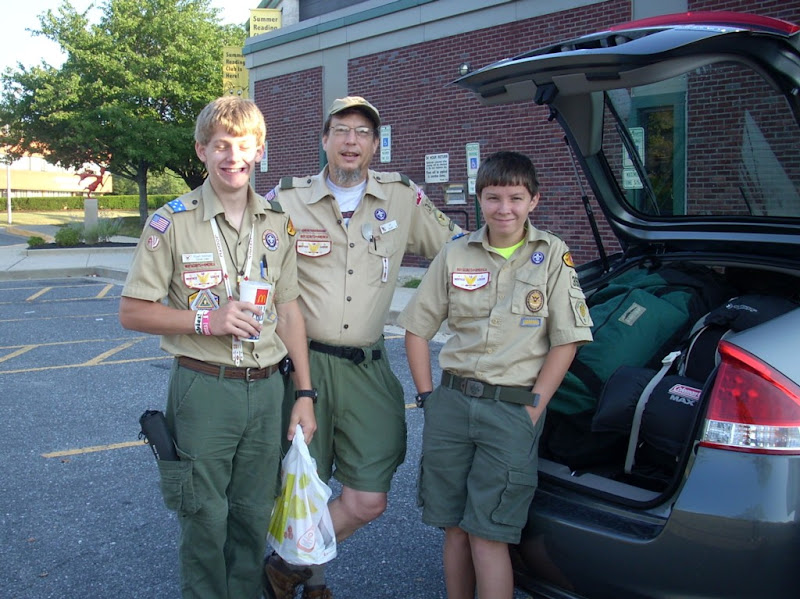