ArrowCorps5 - Home and some missing links

I got home Saturday after a mostly leisurely journey northward through the Shenandoah Valley along Routes 42 and 11 before hitting the highways of US340 and I70.

Turns out that 2 of my photo blogs emailed from camp went awry due to typos, and the smart-phone [sic] doesn't show rejects. So here are the missing tales. 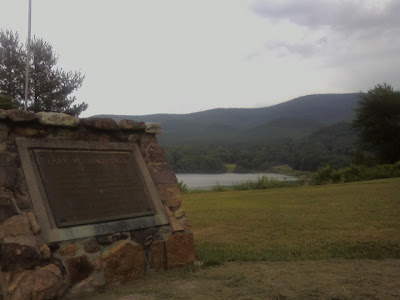 The photo shows the plaque dedicated to Meriwhether, the huge lake that Goshen Scout camps surround. I'll transcribe the text later if possible.

My trip here was pretty easy, heading around the Baltimore Beltway, west on I70, then 340 through Virginia, passing Harpers Ferry to West Virginia, near Winchester, and finally traveling about 100 miles south through the Shenandoah Valley to Staunton.

In Staunton I took a tour of the Woodrow Wilson birthplace and library, learning of his family, politics and history. His eldest daughter moved to India-need to research this trip.

After checking in at Goshen, I was given a temporary tent assignment. With about 50 others, we were trained in Conservation USA for about 3 hours. After a decent camp dinner, some down time for camp chats then another meeting at 8pm.

Still not sure which of 2 work sites I am going to-hope to know at breakfast Saturday. About 400 other campers will arrive today and I'll switch from student mode to squad leader. 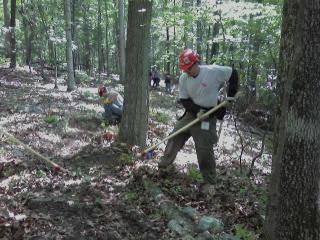 Yesterday we had too many fire rakes but today we needed more on the gentler grades. The morning went by quickly and we leapfrogged 2-3 person parts of our squads as we moved up the trail. The photo shows me using the fire rake to mark the trail.

After lunch we slowed down forward progress as we reached a section with not much more of a grade but many more rocks underfoot. Creating the best path became a continual mental effort to avoid large boulders we preferred not to move. Near the end of our work day we were tackling a low spot that needed reinforcement so we need to pass that onto the next crew. Day off for recreation tomorrow!

Our trip home was detoured as we were somehow picked to be driven to a press sit where we listened to speeches by local dignitaries and then were served local watermelon. A nice honor; I met the Order of the Arrow National Chief (and got his autograph), but we were tired, dirty and hungry, so standing in the sun was not the plan I had in mind. Eventually we returned to Goshen for dinner and cleanup.
Posted by jspath55 at 9:15 PM