Below images are not uploaded there, as they don't rate. Nothing to click. Move on. 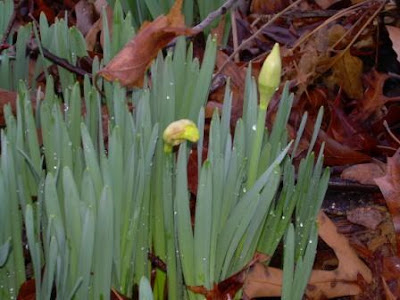 The walk kept getting postponed as every time it looked like it was clearing up a new burst of rain came down. At 3:00 PM the skies were blue, so I set out.

My path was easy except for a hundred yards or so where there was no shoulder on the 2 lane road. Once I got past that onto Earls Beach Road I knew I'd be fine since there was little traffic on that dead end road.

I stopped to take marker photos to upload later to Google Earth via Panoramio. Most of the delay was waiting for traffic breaks, but I still ended up with vehicles in some shots.

The daffodil shot is a few days prior to blooms, or maybe 2 weeks, depending on weather. These bunches are in the woods near the end of the road.

The News American delivery box is an antique, as that newspaper folded over 20 years ago.

The sunburst appeared as I passed the halfway point, showing an ominous cloud bank building. I had taken off my coat as it was warm on the first couple miles. When those clouds appeared the wind picked up to gusts of 40-50 miles per hour.

The box of shot was roadside trash, sitting next to several others scattered in the ditch, but I had no easy way to clean it up. I still had thoughts of stopping at the store.

The last picture in this series shows the front passing overhead. A couple minutes later it was hailing and raining.